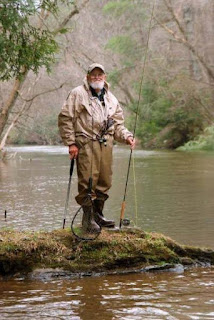 We are so saddened to hear of the passing of our good friend, Rocket Roy Lowe. Rocket was an avid volunteer for everything concerning clean, cold water and flyfishing. We never saw him when he wasn't just happy to be there. You will be missed, Rocket. Thank you for your life as a good example to the rest of us.


Below is his obituary from his daughter Susan:
"Roy Edward Lowe lost his battle with Parkinson’s and passed away on May 2, 2019 in Gainesville, Georgia. He was one of 9 children born to Luther and Sara “Dolly” Lowe. He was born in Atlanta on November 9, 1931 and shared his birthday with his twin brother, Ray.
Roy and Ray, along with their older brother Wade, grew up in Buckhead and were part of the Buckhead Boys as teenagers. The brothers fell in love with fast cars and parlayed that love into racing stock cars and dragsters in the 1950s. Roy decided after his racing days were over to learn how to fly an airplane. He owned several airplanes over the years and flew all over the country. He even built an experimental plane with one of his pilot buddies. During his retirement years he sold airplanes that had a modified engine in them called the Rocket 305 and that is why he was called “Rocket Roy” by his friends and family. As a teenager, Roy spent summers at a family fishing camp in Florida where he learned how to fly fish which he continued to enjoy until, at the age of 85, he finally hung up his rod and put away his flies. Roy was also a member of the United States Navy and served for 3 years during peacetime.
After he left the Navy, Roy graduated from Georgia State with an accounting degree and owned several successful businesses including Lowe Glass Atlanta and Bygone Era. He retired in 1999 and he and his wife, Patty, moved to Clarkesville, Georgia so they could be near the mountains and trout streams so Patty could hike and he could fish.
Roy became very active in several organizations in the North Georgia mountains and was a volunteer for the Foothills Chapter of Trout Unlimited and served on the board of the Soque River Watershed Organization. He was very passionate about protecting the local waterways and worked to help maintain the river banks and protect the water quality. He was known for his fly casting prowess and won numerous fly fishing accuracy contests around the country. He loved to teach new fishermen, especially kids, how to land a fly and catch a trout and spent many days fishing the rivers in North Georgia and North Carolina regardless of the weather.
When he wasn’t fishing he was busy restoring two historic buildings in Clarkesville. He lovingly restored a historic African American church, Dae’s Chapel as well as the Porter-York house. Both structures are listed on the National Register of Historic Places.
Roy is survived by his wife of 45 years, Patty Lowe, as well as his daughter Susan and her spouse Gwen Flaniken. He also leaves behind his brother Ray’s wife, Carol, and numerous nieces and nephews who he loved dearly.
A casual remembrance service for family and friends will be held on May 19th at 1:00 pm at the Sautee Nacoochee Community Center near Helen, GA.
In lieu of flowers the family requests that donations be made to the Parkinson Foundation - Research Projects, 200 SE 1st Street, Suite 800, Miami, Florida, 33131 or the Soque River Watershed Association atwww.soque.org."
Posted by Ted Jones at 7:42 AM