I'm writing to share an upcoming event that may be of interest to you and your chapter members. Our Mountain Bridge Chapter of Trout Unlimited is hosting a viewing of the Fly Fishing Film Tour at Brewery85 in Greenville SC on September 30th beginning around 6:00 pm. We have been promoting this event heavily in the Upstate on our website, facebook, Instagram, Twitter feed and our local fly shops. We are getting a good response from our members and our sponsors.
This is going to be a great evening of film, raffles for gear and trips donated by our sponsors, beer, and community all celebrating fly fishing and cold water conservation.

On behalf of our chapter, I would like to invite you and your members to come join us. We have tickets available at www.mbtu.org  where there is a list of raffle items and silent auction lots. Also on our facebook home at https://facebook.com/mountain.bridgetu you will find more information regarding raffle items and updates. We are looking forward to a fun night.

The Wildlife Commission will implement delayed harvest regulations on 36 trout waters in 20 western North Carolina counties on Oct. 1. Before Oct. 1, hatchery supported regulations apply to these waters. Under delayed harvest regulations, no trout can be harvested or possessed from these waters between Oct. 1 and one-half-hour after sunset on June 2, 2017. No natural bait may be possessed, and anglers can fish only with artificial lures with one single hook. An artificial lure is defined as a fishing lure that neither contains nor has been treated with any substance that attracts fish by the sense of taste or smell.
Click here for more details.....
Posted by Ted Jones at 3:19 PM No comments:


The U.S. Forest Service is soliciting public input on its proposed Foothills Landscape Collaboration Project.  This is your chance, whether in person or online (http://communityremarks.com/conf/index.php)
to make your wishes known regarding USFS management planning for this large area of your national forest.  Please consider taking advantage of this opportunity to participate in forest project planning thru the USFS collaborative process.  Note the public meeting schedule, which commences on October 13. 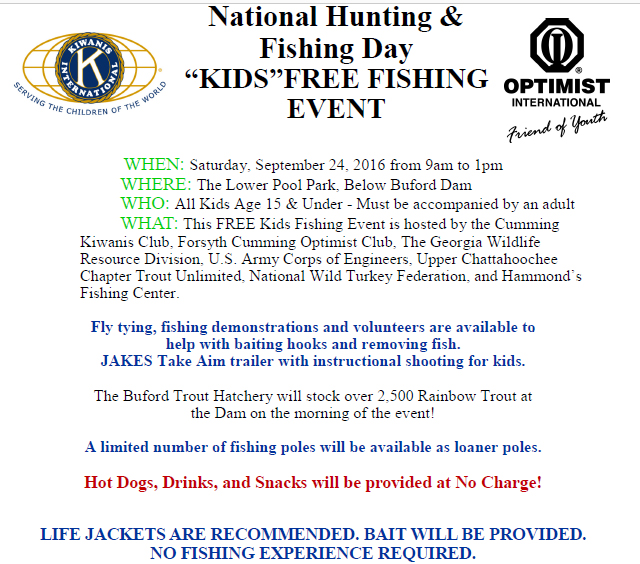 SOMERSET, Penn. – Atlanta is the heart of the south, home of the Braves, the Falcons, the peach and fly-fishing in the southeast quadrant of the United States … fly-fishing? In Georgia?
Forget what you knew – or thought you knew – about Georgia and the sport of fly-fishing and consider that Atlanta and nearby communities support four competing major stores: Alpharetta Outfitters, The Fish Hawk, Cohuta Fishing and Unicoi Outfitters, plus numerous guide services along with the Atlanta Fly Fishing Club, TU GA and GA Women’s Fly Fishers.  These are in addition to a phalanx of boat dealers, general sporting goods dealers and outdoors shops.
The area’s commitment to the long rod is so strong that now the area will host The Fly Fishing Show, Feb. 3-4 at Infinite Energy Center in suburban Duluth.
The Atlanta Fly Fishing Show will boast 50,000-square feet of exhibit space plus additional seminar rooms.   There will be more than 150 exhibitor booths, dozens of fly tiers and seven different presentations each hour including fly-casting demonstrations, featured fly tiers, Destination Theater audio/visual presentations, classes with experts and both formal and informal talks by authors.
The undisputed highlight of the Atlanta Fly Fishing Show will be the casting demonstrations by Lefty Kreh, the 91-year old icon of the sport.  Kreh received the prestigious Lifetime Achievement Award by the American Sportfishing Association, has been honored with the Lifetime Contribution Award by the North American Fly Tackle Trade Association and is also in the Freshwater Fishing Hall of Fame. In 1997, he was named Angler of the Year by Fly Rod and Reel Magazine. In 2003, Kreh was inducted to the International Game Fish Association Hall of Fame. Kreh has served a number of years as Senior Advisor to Trout Unlimited and the International Federation of Fly Fishers.
His namesake fly – the Lefty’s Deceiver – has likely caught more saltwater gamefish than any other in history.
Other featured casting and/or fly tying demonstrators include Dave Whitlock, Bob Clouser (the Clouser Minnow), Dr. Gary Borger, and Henry Cowen.
What many outside the area don’t realize – or tend to forget – is that the focal point of area’s fly-fishing is the 430 mile long Chattahoochee River.
Information on the area notes that “Atlanta is built upon the crest of a large ridge, rather than in the floodplain of the river. This has contributed the preservation of much of the natural scenic beauty of the section that runs through metropolitan Atlanta. North of the metropolis, the Chattahoochee River National Recreation Area protects other portions of the riverbanks in a region that is spread across several disconnected areas.”
The ninth largest population center in the United States, Atlanta is the only one with a major tailwater stream running through its downtown and boasts a self-sustaining wild brown trout population just north of the city.
“We chose a Friday-Saturday for the Atlanta Show for a number of reasons, but have the option to expand into Sunday in the future.”  said Fly Fishing Show president Ben Furimsky.
Parking at the Infinite Energy Center is free; and the show hotel, Embassy Suites, will be newly opened in December.  For reservations call Kana Corporate Office – number 856-297-4748 and request a reservation for the Fly Fishing Show rate.
Admission to the Atlanta Fly Fishing Show will be $15 for one day; $25 for both days.   Children under age 5 are free, under 12, $2.  Scouts under age 16 in uniform are free.  Active military with ID are $10.  Show hours are 9 a.m.-6 p.m. on Fri.; 9 a.m. to 5:30 p.m. on Sat.
The International Fly Fishing Film Festival will be presented Fri. at 6:30.  Film Festival tickets are $15 at the door or $10 in advance.  Prior to the film the inaugural Southern Trout “Legends of the Fly” Hall of Fame induction ceremony will be held.
For additional information, contact the Fly Fishing Show at (814) 443-3638 or info@flyfishingshow.com
Posted by Ted Jones at 6:35 PM 1 comment: 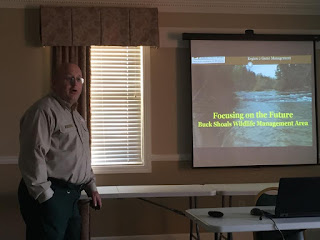 Ken Riddleberger, Game Management Supervisor for Region 2 Georgia DNR, was our guest speaker at the September Georgia Foothills Chapter of Trout Unlimited meeting. Ken works out of the Gainesville office and is responsible for developing the management plan for the new Buck Shoals WMA. He detailed the first WMA in Georgia primarily devoted to youth hunting and fishing opportunities. He also explained what they have done to provide river access to the general public at Buck Shoals.


Our group meets the 2nd Thurs. of each month at 6:00 PM in Clarkesville at United Community Bank.  Our meeting for September will be on Thursday, September 8th.   Ken Riddleberger, Game Management Supervisor for Region 2 Georgia DNR, is going to be our guest speaker at the September Georgia Foothills Chapter of Trout Unlimited meeting. Ken works out of the Gainesville office and is responsible for developing the management plan for the new Buck Shoals WMA.  He will join us Thursday evening to explain the first WMA in Georgia primarily devoted to youth hunting and fishing opportunities.  He will also explain what they have done to provide river access to the general public at Buck Shoals.
For more info send inquiry to info@georgiafoothills.org or http://www.georgiafoothills.org