Are you ready to show your support for the work that Casting for Recovery does across the United States?

Trip to Cherokee, NC for our groups weekly fishing trip

Fish landed in the Catch and Release section of Cherokee, NC this past week by Parks and Yankee John. 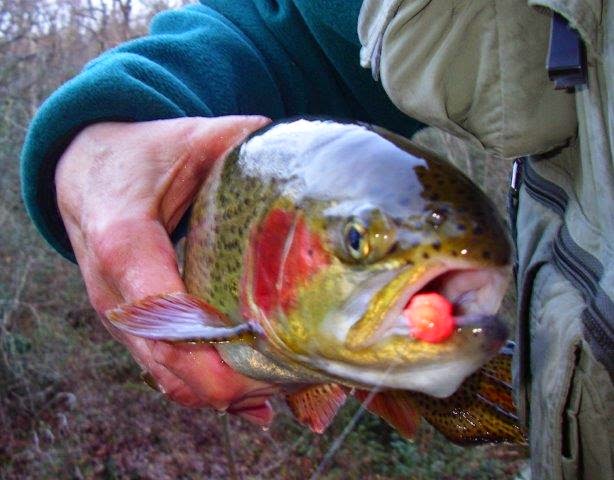 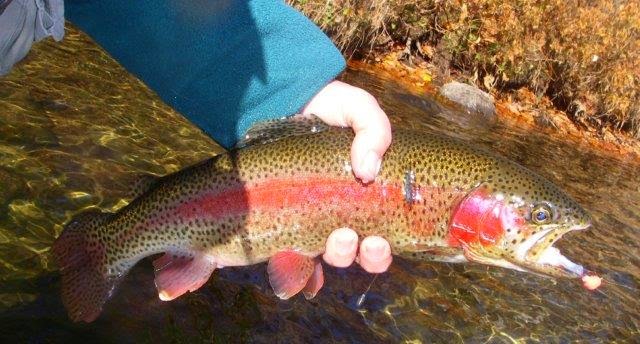 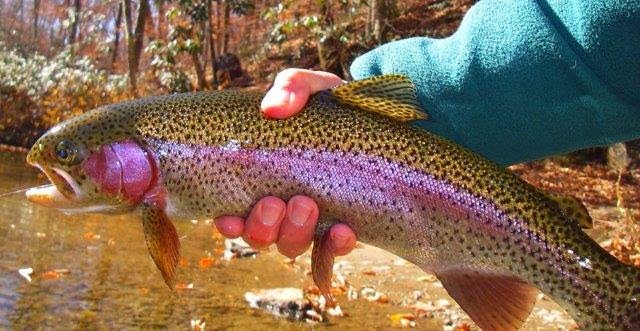 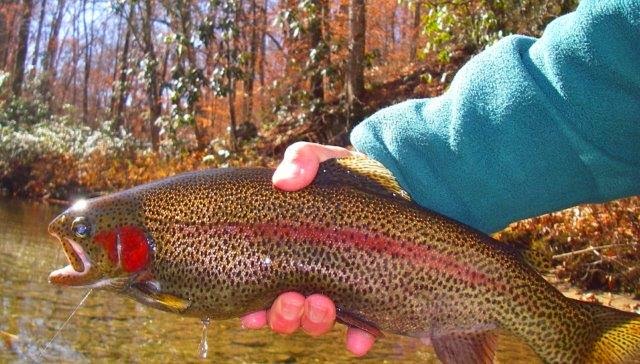 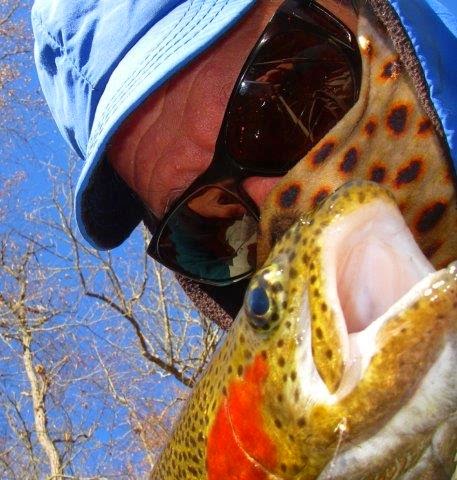 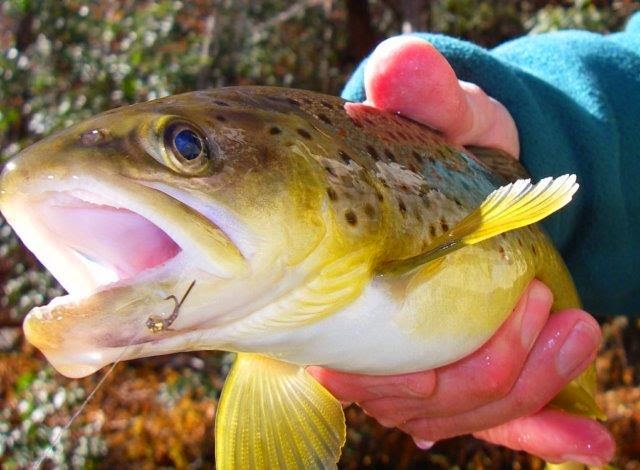 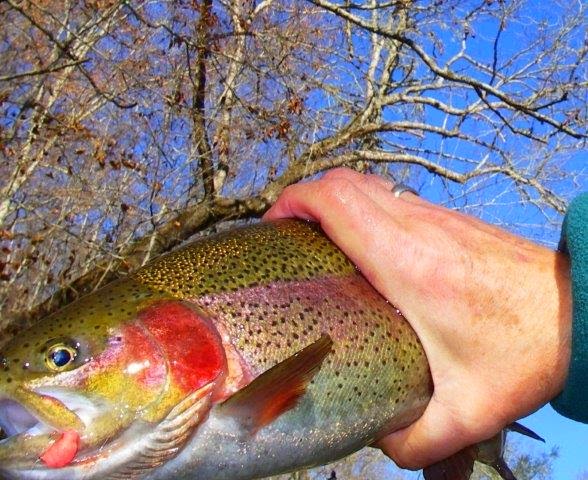 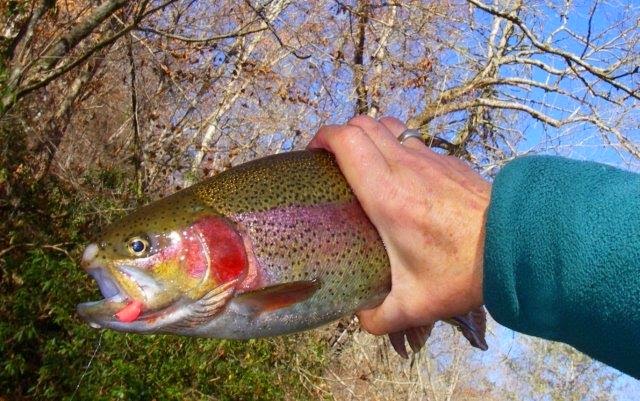 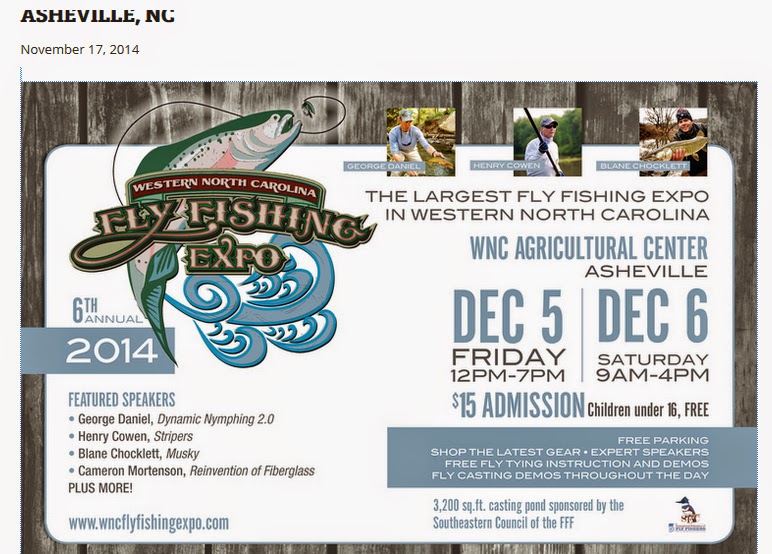 Flyfisher Magazine published by IFFF
Posted by Ted Jones at 3:55 AM No comments:

Nov 15 is a workday at Smithgall Woods


Nov 15 is a workday at Smithgall Woods to repair steps, similar to last year. Need volunteers. Bring shovel and sledge.  Meet at 9:00 AM at the maintenance shed. From Helen it is the driveway before you get to the entrance and it is marked.  Mike Kovanich is the contact for any questions.
Mike
mwk30535@live.com
Posted by Ted Jones at 8:04 AM No comments:

Officers for the Georgia Foothills Chapter....  let's all give them our support for taking this on.... 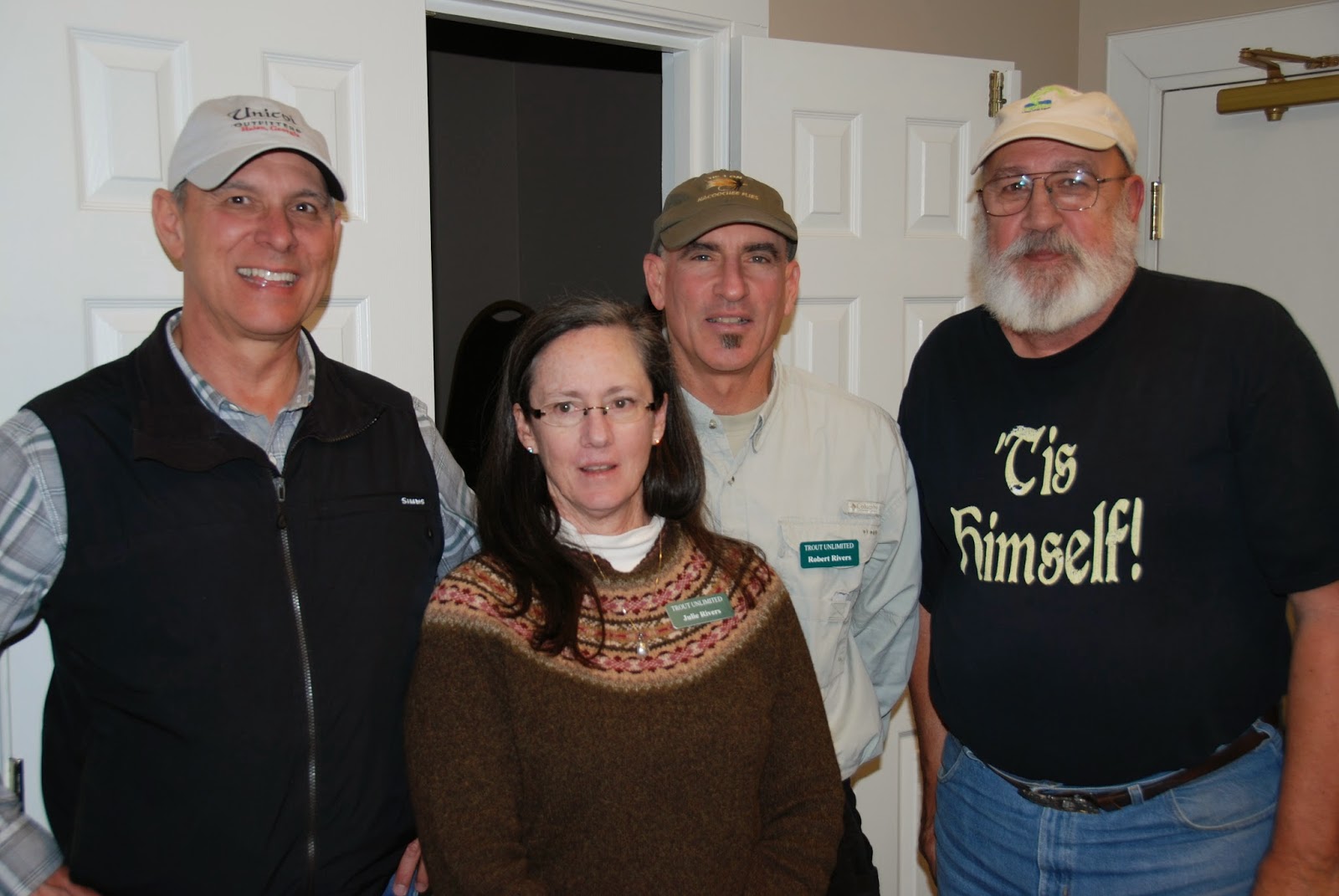 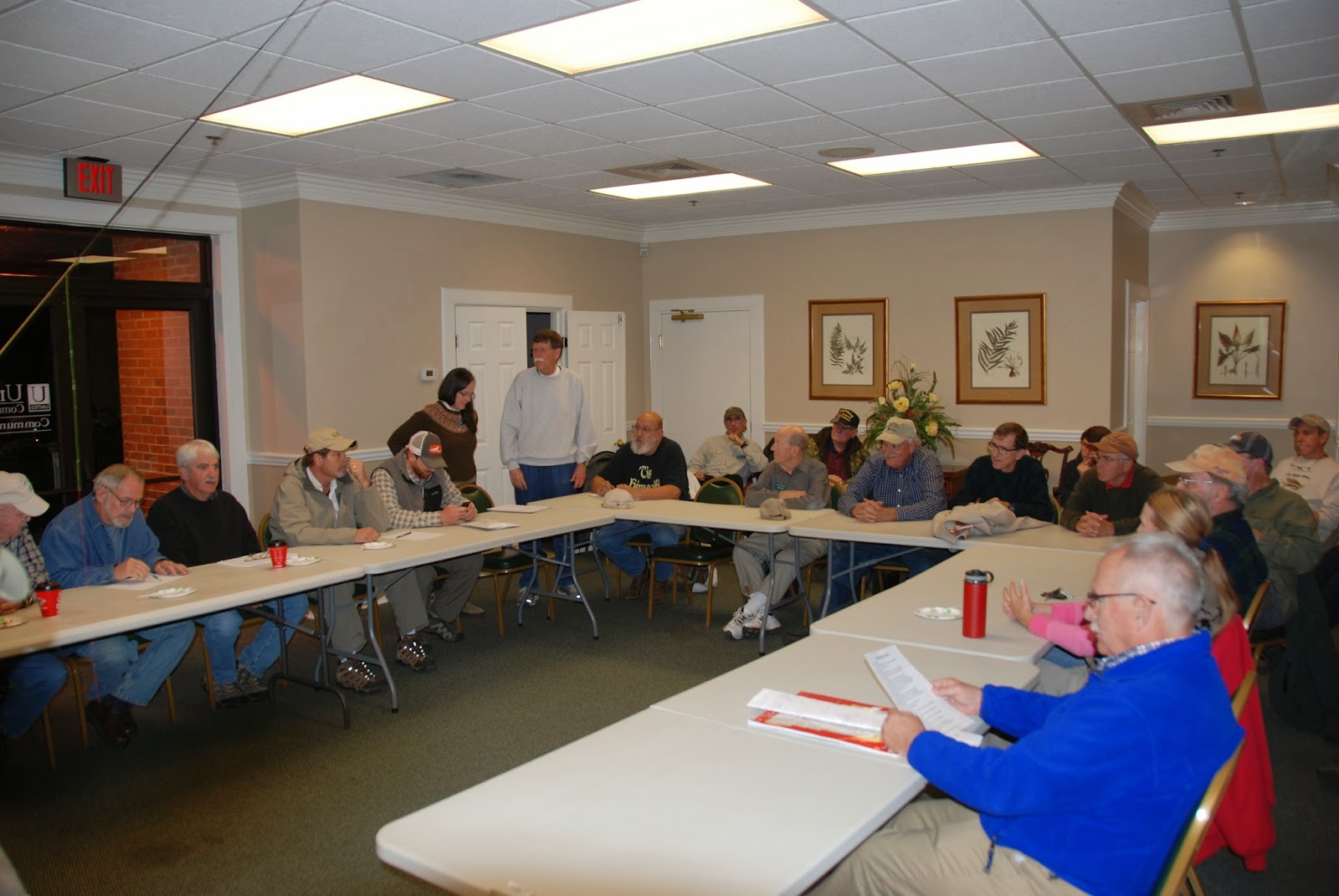 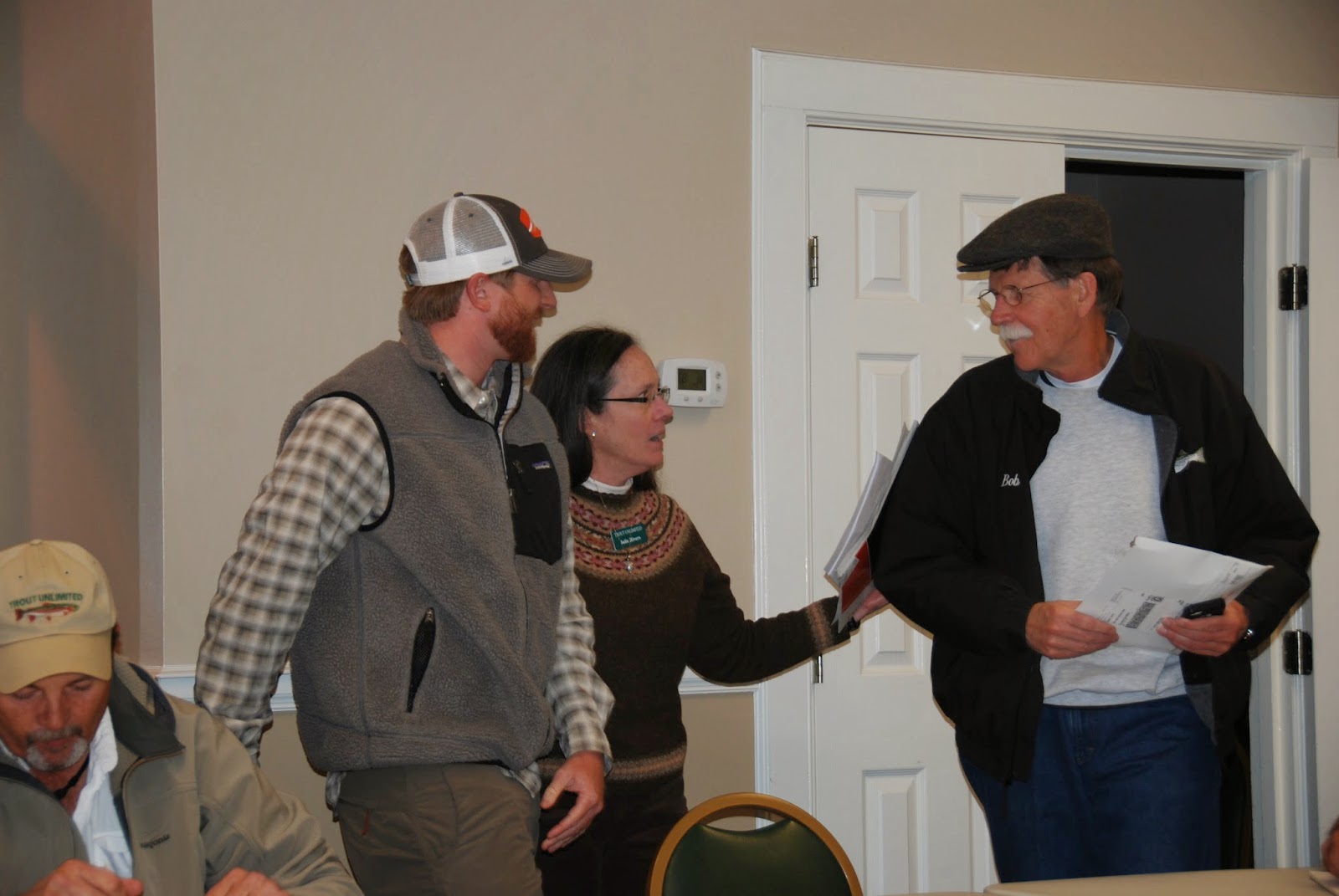 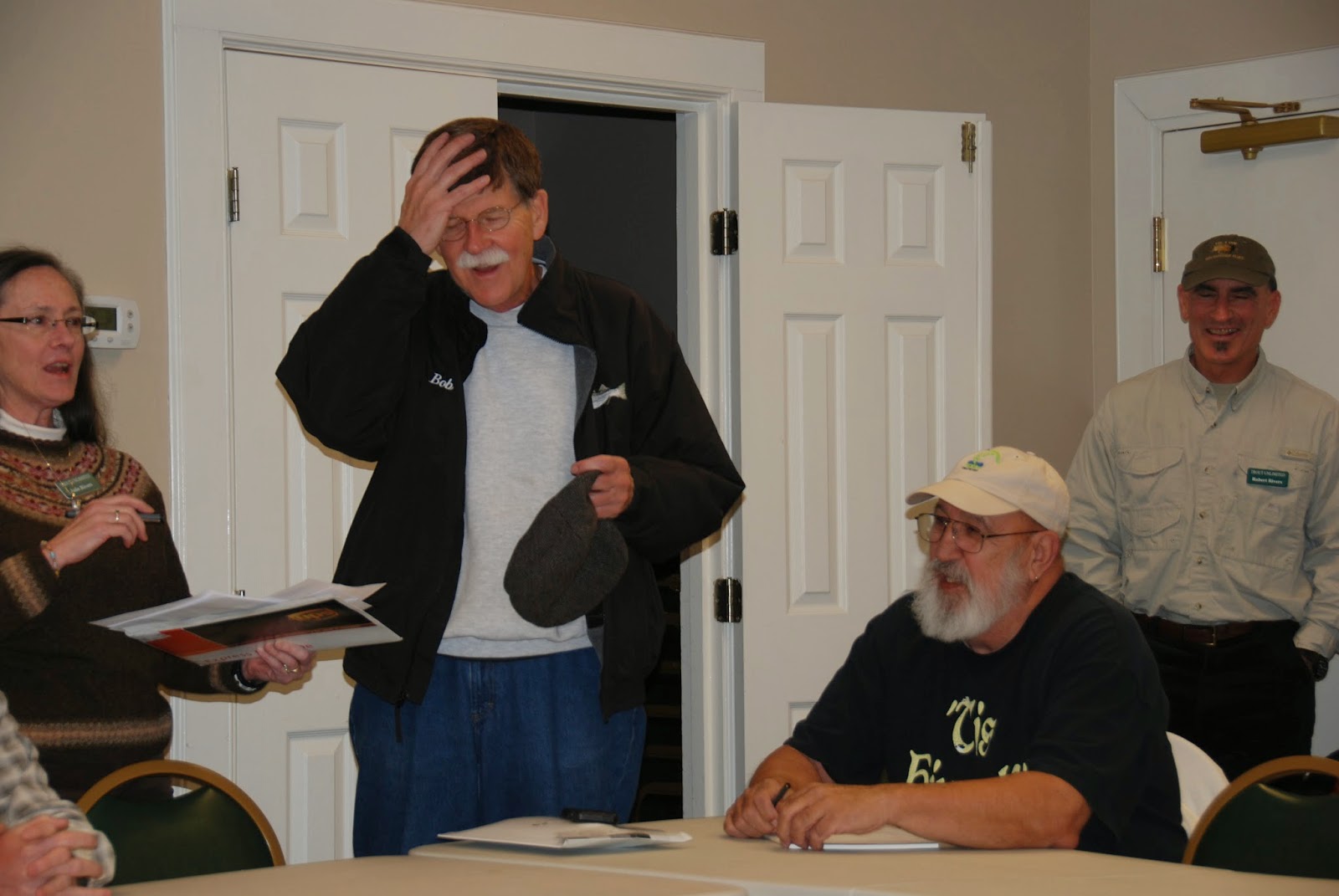 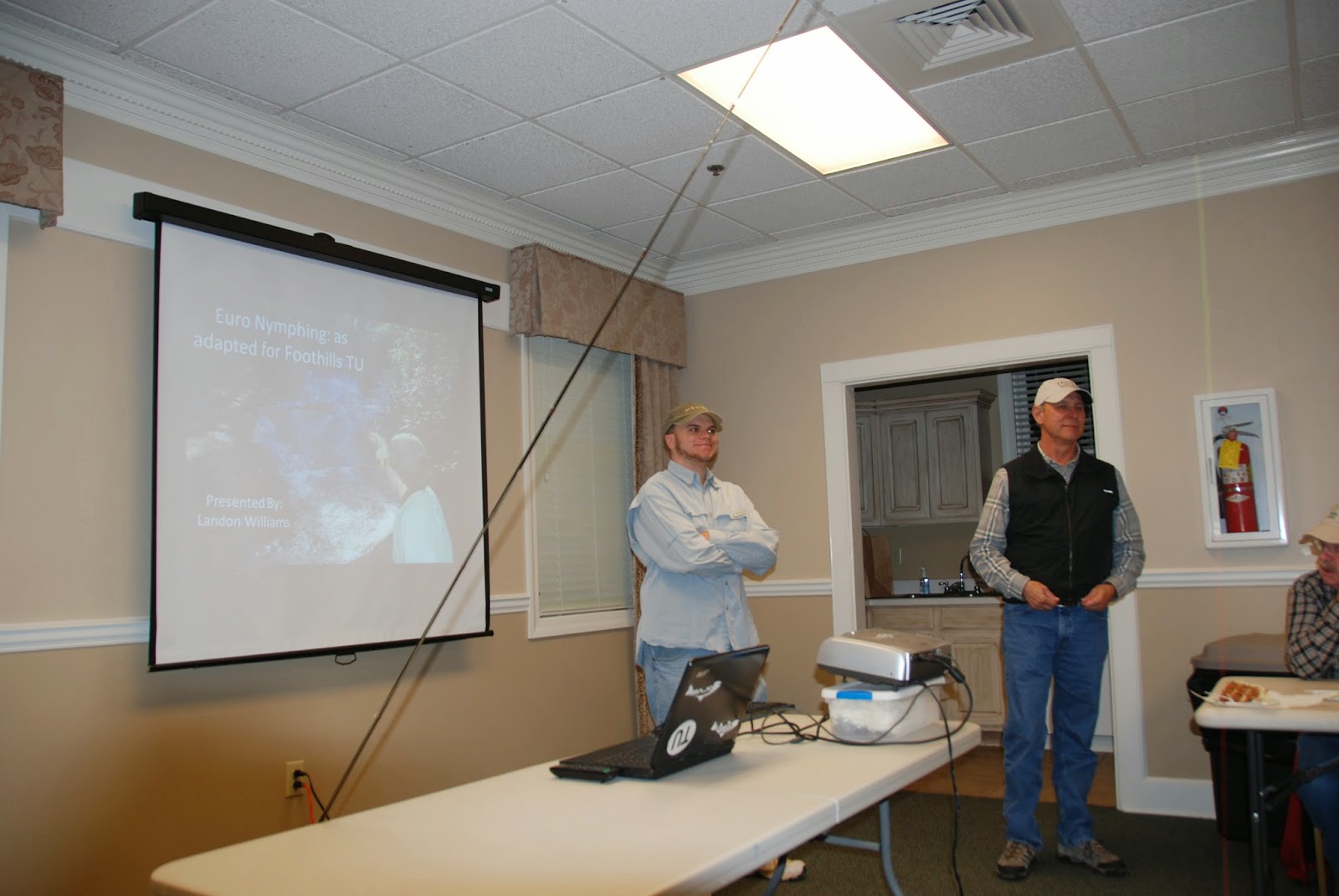 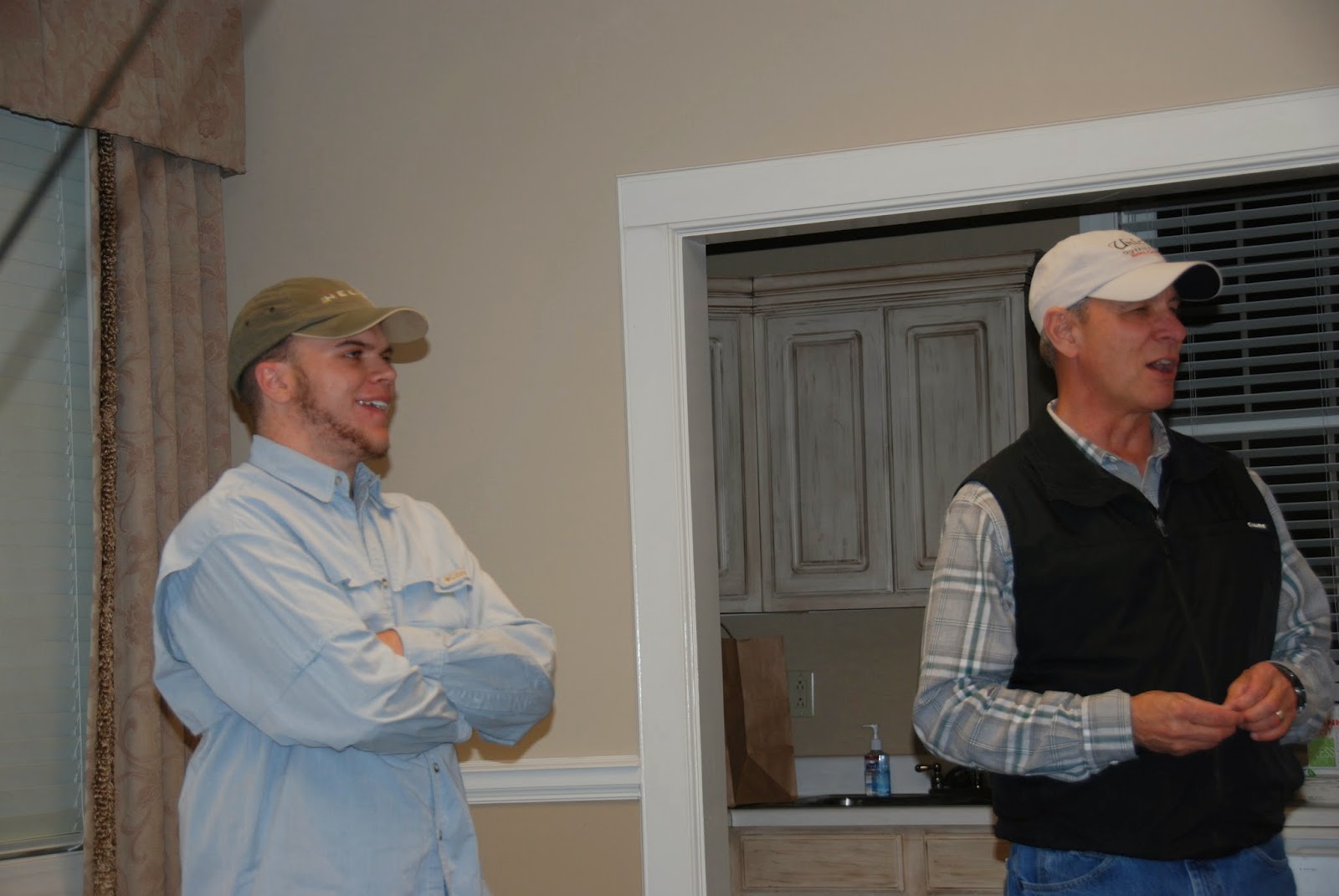 We honor the men and women who have answered the call to serve our nation. Please take a moment today to thank a veteran and to remember those who are no longer with us. 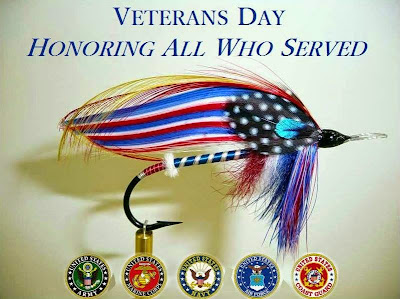 Soque river clean up and fishing with the Savannah River Chapter from Hartwell this Saturday, November 8th. They're providing hotdogs--This is the public section of the Soque--probably will meet at Jackson Bridge around 9 & last til lunch. We need a few of our folks to help out.
Posted by Ted Jones at 5:49 PM 1 comment:

Program for our next meeting on November 13th 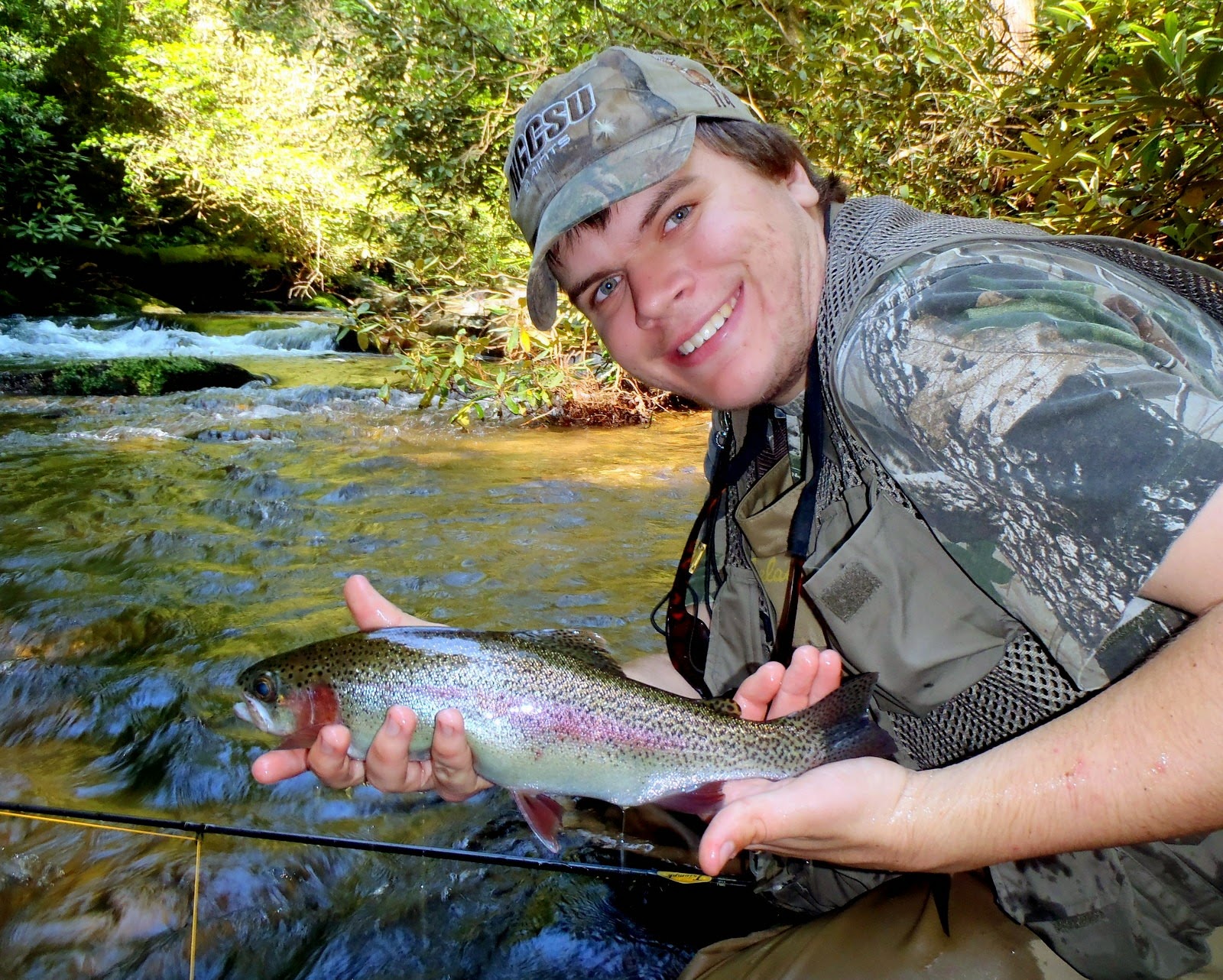 The program at our next meeting on Thursday, Nov 13th will be Landon Williams discussing various European nymphing techniques. He'll be going over rigging leaders, fly selection and appropriate gear. Plus he'll cover various short line and long line methods. Landon is a senior at North Georgia University in Dahlonega and has developed into an impressive trout bum during his tenure there. He's become a small stream specialist surpassing his mentor Jeff Durniak in his skills and success. Landon also writes regularly for the Unicoi Outfitters Liars Club Blog. In addition, he has become a mentor in his own right and annually conducts the Drag Free Drift seminars at the NGTO Spring & FALL FLINGS. 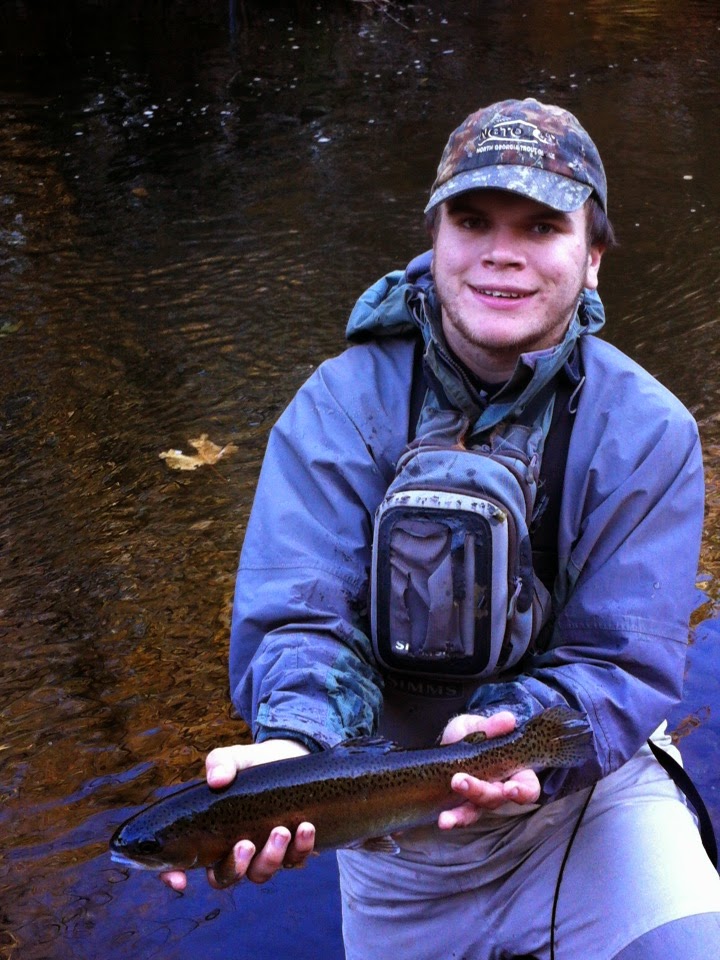 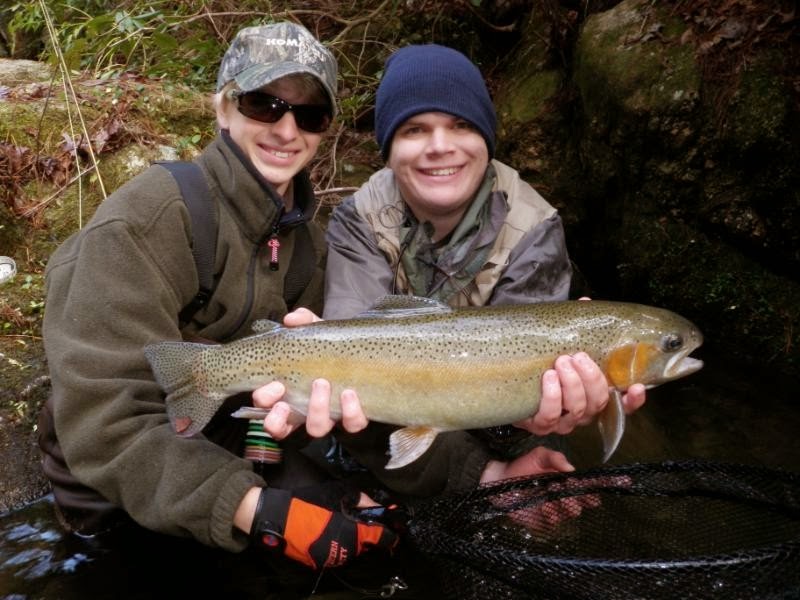 Our Next meeting will be held on Thursday, Nov 13 at United Community Bank in Clarkesville
468 W Louise St
Clarkesville, GA 30523
Posted by Ted Jones at 1:32 PM No comments:

Cole Sosebee national FFA winner, one of our members 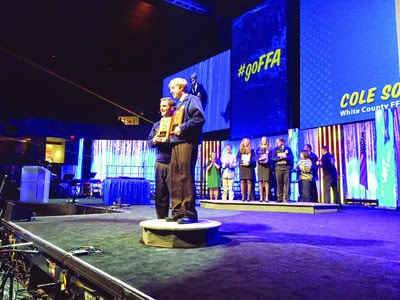 Sosebee, 2014-2015 White County FFA president, was selected as one of four finalists from 50 state winners at the convention for his work with Unicoi Outfitters, where he helps manage stream ecology and provides educational demonstrations. He also volunteers with Trout Unlimited to help educate the public about catch-and-release techniques and fly tying.

“I had no idea that it would be me,” he said. “Just to be a national finalist is an honor. It was especially a shock after talking with the others about their projects.”

Sosebee is the son of Terry and Karen Sosebee of Cleveland. He said he has always enjoyed fishing, especially with his dad, and he went by Unicoi Outfitters to get fly-tying equipment. His involvement grew from that first visit.

Morgan Allen was also recognized as a national finalist in the Equine Entrepreneurship Proficiency area, relating to her ownership and management of her cutting horses. She has bought, bred and trained several horses shown in the cutting horse circuit.

The White County FFA Horse Evaluation Team, consisting of Allen, Sadie Hobbs, Audrey Stevens and Amber Dalton, placed sixth in the nation at the convention, which was attended by more than 57,000 students and advisers.

Three White County students received the American FFA Degree, the highest accomplishment that an FFA member can earn. JJ Harper, Vince Mohler and Hunter Saine each completed 50 hours of community service, earned and productively invested $7,500 and have been an active FFA member to earn the degree.

Osborne attended the convention with students and advisers Dustin and Amanda Keener. He said all 50 states are represented at the convention, and because it is so competitive, students often compete from 7 a.m. to 7 p.m.

Veterans Fishing Rodeo – May 8th from 9:00 a.m. to 12:00 noon. Open to United States Military Veterans. Participants must bring their own fishing gear and bait.

Family Fishing Festival – June 6th from 9:00 a.m. to 12:00 noon. Open to youth ages 16 and under – fun-filled day of fishing and learning! Participants must bring their own fishing gear and bait.

Your help is greatly appreciated. These events are not possible without the support of caring volunteers. Looking forward to seeing you soon!
Posted by Ted Jones at 7:06 PM No comments: