Foothills Monthly Meeting Next Thursday 9/10 at 6:00 PM in Clarkesville at United Community Bank 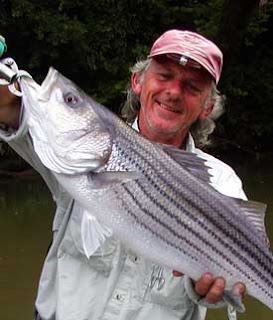 Program by Kent Edmonds of "Fly Fishing West Georgia & Beyond"

Kent specializes in shoal bass on the fly on the Flint River in middle Georgia. He is also a certified FFF Casting Instructor, heads up the Fly Fishing School at Habersham Mill and is the rep for TFO rods.

Kent is one of the most skilled and knowledgeable fly anglers in the southeast and is known for his willingness to share those skills with others.

After growing up in western SC and frequenting the trout streams of NC and north Georgia, Kent moved to west Georgia about 30 years ago. Finding no trout thereabouts, he began seeking various warmwater species with the fly rod. It turned out there were plenty willing to eat a fly...and many were at least as much fin as trout!

After several years of guiding part-time, Kent had a late mid-life crisis in 2001 and became a full-time fly fishing guide. He has fished the streams and lakes of Georgia for over 30 years. His fly fishing experience ranges from Montana to the Caribbean to Hawaii.

A Federation of Fly Fishers-certified instructor, he is available for casting and fly-tying instruction. His articles have appeared in national and regional fly fishing and outdoor magazines, and he is a member of the Georgia Outdoor Writers Association.

Kent has served as vice president of the Flint River Chapter of Trout Unlimited, and was selected as the Southeastern Council Federation of Fly Fishers 2007 Man of the Year and 2013 Fly Casting Instructor of the Year.
In 2007, he became associated with the Grand Slam Group as a manufacturers' rep for several major tackle companies. He continues to guide regularly on Georgia waters.
Posted by Ted Jones at 2:45 PM